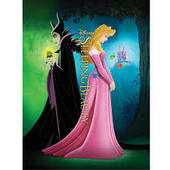 
Behold! The first epic comedy crossover adventure in B-Master & Movieman's Ed, Edd n Eddy: The Ultimate Ed-Chronicles! Join the Eds and Sora, Donald, and Goofy as they enter a fairy tale land of Sleeping Beauty where they meet Princess Aurora (aka Briar Rose) and the 3 Good Fairies (Flora, Fauna and Merryweather), as well as Ven, Terra, Aqua, Master Eraqus and the Autobots. But not all is well; Megatron and his Decepticons have also arrived, and they're in league with the Mistress of All Evil named Maleficent! Can the Eds and friends put an end to Maleficent's evil wicked spell on Princess Aurora (aka Briar Rose) or will Maleficent and Megatron have their way?

Special Thanks to Walt Disney Pictures and Paramount Pictures for the creation of "Sleeping Beauty" and "Transformers".
Running Time: 2 hours and 13 minutes